The flight to Corfu was very carefully planned to go from Exeter. In fact, we chose Corfu precisely because the flight went from Exeter. And then we found that this oh so convenient flight took off at 7am, with check in at 5.

So we drove to Exeter the day before and stayed in the airport hotel, which was clearly used to early starters since breakfast was available from 4am.

We woke up on time. Flight was fine. Arrived Corfu airport at around midday, local time. Tour rep on hand as soon as we passed through Customs to give us a welcome pack and take us to our pre-booked taxi, which went straight to the hotel, where we checked in without problem. They gave us a welcoming fruit punch in the garden while they took our bags up to our room. There was no wrecks and nobody drownded, in fact, nothing to laugh at, at all.

After unpacking and lounging around for a while, we ventured out on foot into the town in search of a late lunch. We were armed with a free map with the street names in English, which made it easy to read, but hard to translate into the street signs which are naturally written in the Greek alphabet.

We found a restaurant on the edge of the Esplanade – or rather, it found us. While pausing to look at a menu, an enthusiastic waiter bustled up to explain how wonderful the menu was. Would we like to sit down here, or across the road? So we went across the road and our lunch turned out to be enormous. If brunch is a morning meal this was more a “dinch”. Diana had a tuna salad which contained chunks of a delicious big tomato. I had an excellent “Greek Pizza”, about a metre across, made Greek by the feta cheese coating it. The waiter remained busy, talking to every potential customer from one end of his outdoor patch to the other, his motto clearly being “They shall not pass”, and crossing the road often, balancing trays of food one way and used crockery the other.

Late in the afternoon we resumed our walk about town. The Old Fort was just across the road from the restaurant, so we meandered over to it. Like many attractions, it is open 8am to 8pm, but we just marked its location for a later visit. We have a fortnight, no need to rush. We then decided to walk round the old town, sticking close to the sea and then cutting inland at the New Venetian Fortress. (“New” is a comparative term here, as in New College, Oxford.)

The road we wanted was Velissariou, a wide, major road according to the map. The tiny alley that seemed barely big enough to squeeze through, but in the right place, didn’t seem promising, but I surprised myself by managing to read the Greek street name. What looks like a B is a V, then there’s a lambda and a couple of sigmas, and you can deduce the rest. It turns out that a science education is great preparation – all those Greek letters used for symbols and constants.

Velissariou turned out to be wide enough to let cars through. This was disconcerting, since the road was paved with very attractive flagstones, for all the world an archetypal pedestrian area. For the rest of the world, maybe. Not for the Corfiots. We were continually dodging cars in a road less than half the width of Molesworth Street*. 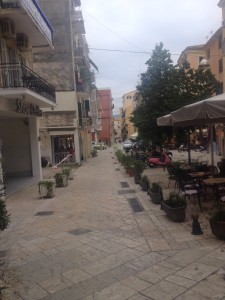 The next street we needed started by going up 20 or 30 steps. Diana was doubtful, but it came out where I expected, at the end of the road of our hotel. We finished the day with a toasted sandwich and a beer/coffee in the hotel garden.

What have we learned? That the map of Corfu Town is an artist’s impression, and that it is possible to read Greek.

* If you don’t know Molesworth Street, you’d better come to visit us, and find out.