We were intending to take the ferry to Vidos Island today. We found the boat, it said VIDOS on it – in Greek, but we don’t mind that now.

No one was on the boat so we sat down on the benches clearly there for the purpose of waiting. A young man came over from the adjacent bar and explained in halting but entirely adequate English (much better than our Greek, in any event) that the ferry was no longer running. There were too few people now and the season was over. Since the fare each way is only €1, you can understand the economics, but it was still disappointing. We had our swimming stuff and everything.

So we sat on a bench in the shade of a tree, drank some water from our bottle, and contemplated what to do. Diana had the bright idea of lunching at the Corfu Palace Hotel and having our swim in the pool there. But it was still a bit early for lunch (we seem to have moved to Greek lunchtimes). The New Fortress loomed above us, and as we hadn’t found the way in, despite walking round it on all sides, we decided to make a determined effort this time.

There is an obvious entrance, but a forbidding sign and a couple of men in Navy uniforms make it clear that this bit of the fortress is still a military establishment. Diana spotted the New Fortress tourist sign and this led us to some steps, which we had avoided in a previous walk as having too much upness about them when we were tired and wanting down, or at the very least level. But this time, we went for it.

At the top of the steps was a gate and a hut for selling tickets, which displayed a notice saying “Entrance is free”. What there was to see in the New Fortress was essentially the fortress. There were no exhibits and the only information board had been put there by the cafe. But you could wander around looking at the walls – very high, very thick – and the slots for shooting out of.

We followed a sign saying “To the top” up some wide stairs and had a look at the various empty rooms with their very thick walls. Then there were some very narrow stairs which took us onto the roof, where we found emplacements for cannons, but no cannons as such. Most of the cannon would have pointed inland rather than out to sea. I guess they expected the Old Fort to handle invading ships. 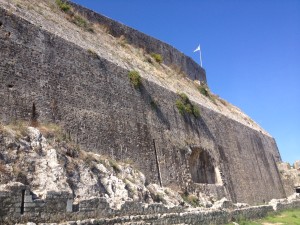 We bought a couple of drinks in the cafe and headed for the Corfu Palace, stopping off at our hotel to use the loo, fortuitously as it happened, because we had left the Do Not Disturb sign up and they hadn’t disturbed. We apologised as we went out, but the receptionist had already realised when we came in and got someone on the case. “No problem,” he said. “The staff are still here.” That is customer service.

The Corfu Palace Hotel is about a five minute walk from ours. It is a modern, international hotel looking over the bay, with a spa and a casino and a restaurant with a swimming pool. What is an international hotel going to be good at, I thought? International food, such as a club sandwich. So we ordered a couple of club sandwiches which turned out to be (a) very big with lots of chips, and (b) very ordinary. What was international was the price.

A few people were lying on loungers around the pool, one or two taking a dip. We stripped off to swim suits and went in. The water was initially cool, but a pleasing contrast to the hot sun. Diana was first to notice that the water was salt. The increase in personal buoyancy was amazing. It was hard to go from a swimming position to standing up; my legs just didn’t want to go down. On the other hand, I could just float there, practically unable to sink – a novel experience.

In the evening we went to a tiny little pavement restaurant by the Catholic cathedral. We had passed by it most days on our walks, and it always seemed busy. All the tables were occupied, so they brought out another one for us. That is also customer service.

The menu was limited, being mainly grilled meats. The clue was in the restaurant name: Pane & Souvlaki. So souvlaki was what we had, and excellent it was. Chatting to the waiter, when he explained that they were a small restaurant and didn’t have space inside to do puddings, we found out that in high season they spread out twice as far over the pavement (which explains why they had an extra table instantly available). And it was cheap. The best meal at the cheapest price we’ve yet had here – I reckon we’ll be back.