After the rigours of the island tour yesterday, we kept it a bit low key today. Our main target was the Byzantine Museum. This is clearly marked on the map with a big ‘museum’ symbol, but regular readers will not be surprised to hear that the location nonetheless remained uncertain.

It appeared to be in the maze of streets set back from the sea front, east of the Old Port, so as we got into the approximate area, we dived down a likely street and tried to head in the right general direction. As always, this involved coming to apparent dead ends, finding an alley roughly at right angles and hoping to find another alley roughly at right angles the other way to get us back on track.

Eventually, after an interesting meander past people’s front doors, avoiding their washing strung from posts, we emerged into a comparatively open area with a lot of steps on the right leading down to the main road along the sea front, and the Byzantine Museum entrance on the left. On the main road was a large brown sign saying “Byzantine Museum”… 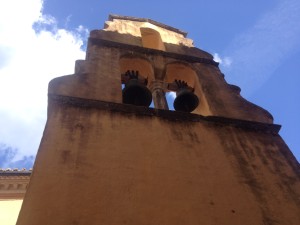 Bell tower of the Byzantine Museum

Entry cost a stupendous €2 each and we walked around a corridor called the exonarthex looking at religious paintings dating from the 15th century onwards. I was struck by the three pictures of St George slaying the dragon, in all of which the dragon is noticeably smaller than St George’s horse. I’d always imagined the dragon as much larger (though not up to filmic Smaug proportions) and it makes St George’s feat in slaying it seem that much less heroic.

The exonarthex ran round three sides of the building, with a nave in the middle. This was a church, actually a basilica, that really was a museum – what more could I ask for? (See Day 5.) There was lots more bling in the nave. Stairs at the back of the exonarthex led up to a gallery, which we had learned from Angela yesterday was originally for the women, who were not allowed into the nave. Diana reckoned it would be a good place for young women to check out the young men below.

We then had a long and leisurely lunch at Faliraki. This a small, low-lying area on the water’s edge outside the old city walls. It is so low lying that as a large cruise liner and a high speed hydrofoil went by in the bay, the lady on the next table warned us to pick our bags off the floor. The waves from the wash crashed over the outer walkway and into the sea wall a foot higher, not quite wetting our feet. But you could see how it might. 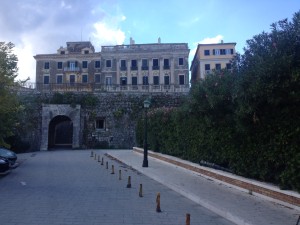 The exit from Faliraki through the city walls

It was very peaceful, watching the water, the boats, the occasional swimmers, and we ticked off another Greek food speciality – mezze and ouzo.