Today (Sunday) we went to the Archeological Museum of Corfu, a daring journey right to the edge of our map. It was closed. It’s been closed for ages, with no indication of when it might reopen. Should have used a well known search engine, not relied on a clearly out of date guide book.

So we turned around and headed back towards the Old Town, determined to get our history fix by visiting the Old Fort. On the way, we heard a cacophony of car horns, so we stopped to see why, expecting boy racers angry with each other. Instead, the lead car, a black Mercedes, was decorated in white ribbons, and leading the hooting. The next half dozen cars were making just as much noise. A wedding procession, we surmised, the hooting indicating much joy at the marriage and also, possibly, “We are all together, please don’t cut in.” (Except that someone did, in a black pickup truck, the scum.)

Entry to the fort costs just €4 and for that you get to wander around fallen down walls, pop in to various chapels and churches with displays of art both Byzantine and modern, and climb to the top of the Land Tower. This is built on the highest hill, nearest to the land. The other hill, more out to sea, is called with classic logic the Sea Tower, but the ways to it are fenced off. From the top you get a good view of Corfu town and a clear sight of the airport. We also reckoned we could pick out the Bella Venezia and even our room window. 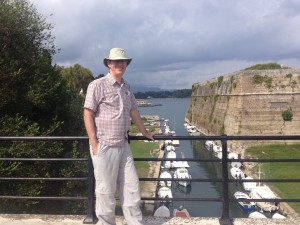 Kevin on the bridge to the Old Fort

Coming down, we discovered that some of the cobbles in the steps were made of marble and worn to shiny smoothness by many feet. Thank goodness for Shell’s “Hold the handrail” rule, ingrained over years of HSE training, because it stopped me going flat on my back.

The fort has its own cafeteria, so we had lunch there, until the wind blew the last few crisps off my plate and onto the floor, where they were seized by pigeons with very feathery legs.

After siesta In the hotel room, we went for a walk to the port area. Round the corner from the hotel we found a horde of chattering children with their mums and dads, all waiting to get into a cinema. Waiting, mind you, not queuing. In Britain there’d have been a line of people along the pavement, but this is not Britain. A scrum, spilling out into the road, is what it was, and into the road we had to go to get by. But that was okay, the road was only the major route around the Old Town.

On our artist’s impression of a map of Corfu, there seemed to be a road round the New Fortress that I wanted to take. We overshot it, since it looked so unprepossessing, and had to backtrack. If it had started out unprepossessing, it got worse, narrowing as it rose alongside the walls of the fortress. But a girl on a motorcycle came the other way, which reassured me (if not Diana) that we weren’t on a road to nowhere. Suddenly, we were in a very narrow alley and heading back downhill, sometimes on steps, but we couldn’t get (more) lost since there were no side alleys. We emerged onto wider roads by the port, which after all that was very dull.

Plunging back into some more tiny roads in a different part of Old Town, we came to a large, bright pink building at the top of some steps. Painstakingly working out the Greek letters spelling “Metropolitan”, we deduced it was the Orthodox Metropolitan Cathedral. We decided not to go up the steps because it didn’t seem right to get mixed up in the wedding party there.

So we went up some other steps and round the cathedral and along some dimly lit streets and ended up at a taverna where we ate a classic Corfu sofrito – very tender beef cooked in a garlic sauce and served with chips.

Back at the hotel, Diana insisted upon margaritas before bedtime. “Make sure there’s salt,” she said. “It’s not the same without salt.” Or perhaps it didn’t quite happen that way and maybe someone else suggested margaritas. Who can tell?