Today was the day we had been looking forward to and dreading. We’d booked a sea excursion to Parga on the mainland and Paxos, a small island to the south, which seemed really nice. The dreading part was the start time: 8.30 am.

8.30? 8.30? What kind of time is that? We’d barely been making it into breakfast before it closed, and here we’d be banging on the door almost before it opened.

But the day before, we’d had a phone call from the tour company to say the trip was cancelled due to predicted bad weather. The forecast was for thunder storms and high winds. So some time after breakfast we walked to the sea front to see how bad the sea was.

If we had been wanting waves crashing on the shore, we were disappointed. It did seem a little choppier than normal out in the bay, but there was a decided absence of crashingness against the sea wall.

At the other end of the Esplanade there was a cricket match going on. This is marked on the map as a cricket ground, but it was good to see it being used as such. A “Lord’s Taverners” flag was flying. Just as we found a place to sit and watch (or in Diana’s case, to sit) the match ended and they all shook hands and walked off. So we had lunch 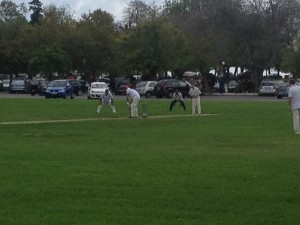 Cricket on the Town Green

After lunch, we decided it was worth another €6 to visit the Japanese exhibition we’d passed by on Day 5, since we were pretty adjacent to it. There was porcelain to see, but in contrast to the Chinese display, there was also a lot about warfare, with samurai swords, armour, asymmetric bows, etc. As we came out, another match was underway, but before I could get more than a couple of photos, that match ended too. Keener on the bar than the cricket, that lot.

By the evening, weather forecasts (I’m using two different ones) were confidently predicting no more rain until our departure day, on Friday, so we went out to dinner confidently without rain gear. We returned to a back street cafe and had the mixed grill, which arrived on a huge plate containing two chops, a burger, a large sausage, a flattened chicken breast and a pile of chips – each. Good job we had a small salad to go with it.

We decided to go back to the hotel for coffee and metaxa, which turned out to be a prescient choice (returning to the hotel, that is, not having metaxa). The weather, pleasing itself and spurning forecasters’ expectations, threw a downpour a couple of minutes after we’d got in.