What am I doing, I thought. It’s 6 am. I haven’t got up this early since my Shell days and the morning flights to Rotterdam. Which is somewhat apt since my reason for getting up at such an ungodly hour was a day trip to London for a lunch celebrating my friend Kevin’s 35 years service with Shell.

I got the invitation and discovered that the 6:57 at Bodmin Parkway would get me up to London in plenty of time to cross the city to Canary Wharf for lunch at The Gun. Especially when Kevin rearranged the start time to 1 pm.

I packed my breakfast sandwich, an umbrella and a large paperback (Wolf Hall) and drove to Bodmin Parkway station, leaving behind a sleeping Diana (who actually had her own exciting day planned with the first evening of a harp course). I was surprised to see on the train a veritable forest of seat reservation tickets, among them my own. That’s a lot of people at that time in the morning, though admittedly most of the reservations were from Plymouth, where they could get an extra hour in bed.

The train rattled along on time till somewhere around Slough, where it came to a halt and we were told that one or more goods or passenger trains had broken down just ahead of us. We crawled from signal to signal, eventually picking up speed as we passed the site of the incidents, only to have our hopes crushed as we stopped again just outside Paddington, waiting for a clear platform. We arrived 35 minutes late.

The London Underground, however, surpassed itself. Straight onto a train at Paddington, and another at Baker Street (‘Morning, Sherlock.’) and I was at Canary Wharf inside half an hour. I called Kevin to say I was there and he assembled the rest of the party. It turned out to be the rest of the party minus two, who had made their own way to The Gun and were already working their way down the wine list. I already knew four of the people – Kevin (of course), Maral, Catherine and Angus – but the others were good company as well: Kalli, Stef, Nico, Rochelle and host David.

The walk from 40 Bank Street to The Gun took about ten minutes. There was some consternation at a sign saying “bridge closed” since alternative routes were (a) much further and (b) not known. This was new territory, moving out of the new office block area into old residential streets. However, other people were apparently ignoring the  sign so we pressed on, and found that it was attached to a gate, which when swung shut would stop people going the other way to the pontoon bridge we had just crossed. 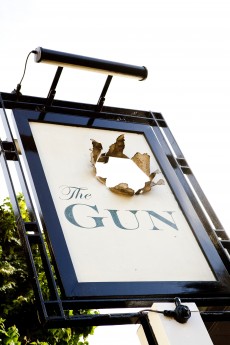 Food and wines at The Gun were very good, though there was some doubt about the quantity of Scottish salmon in the Scottish salmon fish cakes. I made a point of avoiding the Cornish mackerel; I’d sooner have that in Cornwall, where it hasn’t had so far to travel. There weren’t speeches so much as a general discussion about what a good chap Kevin was and always had been, despite his being responsible for the election of Margaret Thatcher by joining Shell in 1979. (I may have misremembered the causality here.)

Sadly, I had to depart shortly before 4 o’clock to ensure catching the train with my reserved seat. I wasn’t the first to leave. Maral had not fully understood the implications of an invitation to a 35 year celebration lunch which stated a start time but not a finish, and had arranged a meeting. The others remained. I have no idea for how long, and I make no insinuation here, but it was after 9 o’clock that Kevin sent out a ‘thanks for coming’ email…

The train home, too, was delayed, not by any mechanical defects this time, but deep in in rural Somerset by cows on the line. I got home at around ten.

It might seem a bit extravagant to spend a whole day and a return train fare just for lunch, but Kevin is a good friend I worked with for over a dozen years in a couple of different departments. If not for him, then who? Thanks for inviting me.