I had it all carefully planned, taking advantage of a happy coincidence of dates: Friday 5th September, the Orieladelphians 40th dinner in Oriel, and Thursday 4th September a community energy conference in Oxford Town Hall. One return trip, three nights B&B in Oriel, sorted.

The community energy conference was PoweringUP, organised jointly by OxFutures, an Oxford based community energy group and DECC, the Department of Energy & Climate Change. It even had an address by the Secretary of State, the Rt Hon Edward Davey MP. (That’s enough copying from the agenda – Ed.)

When I spotted that the event was on only the day before the Orieladelphians, it seemed obvious that I should volunteer to go as WREN’s representative, so I booked places at the conference and the awards ceremony following it. (See April 17th blog for more about WREN, or go to the website here – but do come back again.) I also bought my rail ticket, opting for a standard return with flexible trains. That’s flexible trains as in you can choose which one to go on at the time. Most trains are flexible enough to go round bends. This was indeed fortunate, as mere days later I received a doom-laded missive from Stephen, this year’s Orieladelphian president. Young master Becque had booked a holiday in August, carefully avoiding the dinner. Then he changed the date of the holiday, or allowed it to be changed, so that it carefully did not avoid the dinner.

The first reaction – “You’d better book a plane ticket home quickly, before it gets even more expensive” – was replaced by a can-do change to the date. Oriel could do it a week later, could we? It happened that we all could, so we did.

So I came up for the conference and had an enjoyable Thursday talking community energy with representatives of other groups, local authorities and commercial enterprises working in the field. It was the first time I had been in Oxford Town Hall, and hadn’t realised just how big it it is and how splendidly Victorian the main hall. There were some interesting people, so I handed out business cards and got a few back and we ended up in the bar of the St Aldates Tavern sometime around 8 o’clock, where I am sure the talk became even more interesting, if I could only remember it.

My travel plans the following week firmed up when we booked an appointment with a solicitor in Taunton to discuss a legal matter (as you might imagine) and were joined there by number one daughter Ellie, who lives in Oxford, as older readers might remember. So I went home with her on Thursday, had dinner in Atomic Pizza surrounded by old comic book covers (“got that one, and that one, and that one…” to the point of exasperation) and wandered into Oxford centre on the bus next morning.

I arrived at Oriel at about 10 o’clock, expecting to be told that it was too early to check in, and was not disappointed. They would allow me, though, to leave my suitcase in the Lodge. While I was locking it, a woman came in to say that the rooms were all done and ready. “It seems you can check in,” said the porter, so I did. The room overlooked the building site that third quad has become in the latter stages of the refurbishment of the Rhodes Building. The main activity seemed to be digging trenches, though I use the term ‘activity’ advisedly.

On Ellie’s recommendation, I went to the Story Museum on Pembroke Street, which had an exhibition of photographs of authors dressed as a character from their favourite children’s book. The photographs were placed in a setting from the book. So we had Terry Pratchett as (Just) William Brown in the Outlaws’ meeting shed, Michael Rosen as Till Eulenspiegel in a trick location, Benjamin Zephaniah as Anansi the Spider hanging from the ceiling, Frances Hardinge as the Scarlett Pimpernel hidden in a cupboard and so on. You could only see the Borrowers down a microscope and the scene from Narnia was entered through a wardrobe, of course with hanging fur coats. It cost a slightly eye-watering £7.50 to get in, but was a lot of fun. An attendant said that they had had more groups of adults than children.

After lunch at the Bear (an enormously thick sandwich plus salad) (plus a pint) I pottered around a bit, ending up in Blackwell’s, where I found some books for Diana, including Stanza Stones by Simon Armitage (See Culture, 17th September 2013) which contains not only the poems but the story behind them. And lots of photos of Yorkshire.

At seven o’clock, Orieladelphians gathered in the second quad, outside the Senior Common Room. Guests this time comprised Hazel, wife of the former Provost Ernest who sadly died earlier this year, and Syd, a former SCR butler who butled for us at dinners many years ago. Syd (and we) had been concerned that he wouldn’t make it due to ill health, but he was standing there with two sticks, accompanied by his daughter Marina. 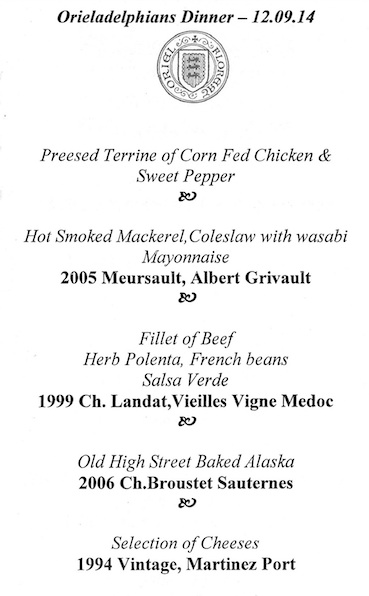 The dinner table was laid for our absent friends as well as the nine still-existent chaps. Stephen had done a deal to get SCR wines rather than the Conference ones initially offered, and wisely allowed head butler Asefay to choose them to match the courses. The dinner was excellent, and we will pass over the matter of the Half-Baked Alaska with hardly a mention.

We adjourned to the small SCR for further port and brandy, all except Thomas who adjourned to the small SCR for non-alcoholic beverages. The change of date meant that he had to travel home that night, rather than stay over. He was not downcast, however. As he explained, the change had meant that he could spend the previous Saturday sailing in glorious weather.

After Thomas left, the rest of us got stuck into the port and brandy some more, before leaving for bed at some time after 2.30. Though in fact Ranulph and Ashley stayed up even longer talking. We assembled, most of us, for breakfast in hall (though not Ashley, nor Stephen), and after checking out, moved on to Brown’s cafe in the covered market, for further coffee and tea and in some instances, food.

A few days later, I got an email from Ashley: “Very probably linked to the [inability to get up for breakfast] is the realisation that the residual functioning neurone charged with the task of remembering the provisional date for next year’s dinner has perished. Steve and I think Friday 11 September 2015 … was agreed.” Actually, he was right, because I had managed to get it into my phone calendar and could look it up. Whether my neurones would have been up to the task otherwise, I am less sure.