Spot the Dog: this is neither an invocation to locate a canine illicitly transgressing on Polzeath beach after Easter, nor an invitation to drip paint over a mutt, nor even a recitation of the title of a favourite children’s picture book. And certainly not a review of poor-performing investment funds…

It is rather a Wadebridge band featuring Stephen on guitar, Lizzy-Jane on double-bass and Adrian on keyboards. Or perhaps it is a twice a month gathering of the aforesaid trio together with assorted and various other local musicians and poets in the Picture and Coffee House on Molesworth Street, Wadebridge. This establishment will sell you a picture or a coffee at the drop of a hat, and more importantly a beer with even less reticence. You can pick up a Doom Bar or a Cornish Pilsner (best lager in the world, apparently; I haven’t tried them all, but this one was pretty good)

We went down a couple of weeks ago, Diana and I, to see what it was all about. It was pretty full, but we found seats with some people we knew, right by the door and, it seemed, even closer to the draught when the door was opened. People played music, and told stories, and read poems, some original and some by famous poets. Diana read one she had brought along (we did have an inkling of what to expect).

We went again yesterday. The place was emptier and we could sit out of the draught, but further away, as it turned out, from other people we knew. Spot the Dog was playing as we arrived and a few others joined in. We drank a beer or two – let me be more precise, I drank a beer or two while Diana had a hot chocolate – and listened. The music paused, the musicians needing a break and to recharge their glasses, and Lizzy-Jane asked if anyone wanted to read something. We waved a hand vaguely and Diana stood to read a poem she had written at the Indian Kings poets group. There was merited applause and someone asked if it was her own. Yes, she asserted, and there was more applause. Well, it was a good poem.

I then stood to read a poem I had written some four or five years earlier at Woking Writers Circle with a metre and rhythm borrowed from the ancient Norse (oh, all right then, lifted from Hiawatha). It also received applause. There were other readings of favourite poets including Dylan Thomas. A couple of people came over to chat. The music resumed. Later on, Lizzy-Jane asked if we had been given enough time, whether there was anything else we wanted to read. I assured her it was okay. One poem a fortnight is hard to keep up with; more than one would exhaust the backlog much too quickly

The highlight of the evening came accidentally part way through. A guy had a long instrument in a bag, which he slowly extracted, being careful not to impale the ceiling with it. It proved to be a didgeridoo (though he probably knew that all along). 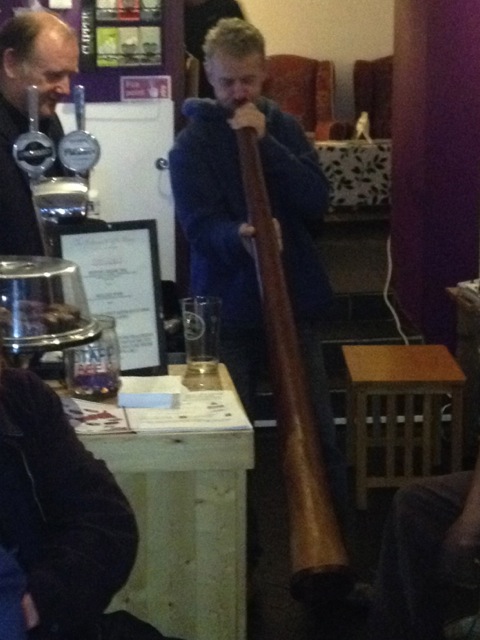 Proof. There really was a didgeridoo.

He began to play and a few others joined in, improvising (I am fairly sure). At the end of the piece he seemed totally breathless, but was prevailed upon to play again. Even more people joined in, making a sound not aboriginal Australian, and not Indian and not South American, though there were hints of all of them. Well, why listen to me trying to explain it when there is this recording of the last minute and half (which was when I realised I could record it on my iPhone – I’m quick that way, hem hem).