Act I: The Birthday

My sixtieth birthday fell on a Sunday. Not the Sunday of my party, but the one before. Diana and I were on our own in Cornwall and decided that visiting the Eden Project would be the thing. I booked tickets on-line a couple of days before, getting the cheap rate, and said OK to Gift Aid which converted our tickets into passes for the year. I also booked a slot on the Skywire. This is a long wire, which you hang underneath and slide down at high speed. I had thought about going on it a few years ago, but arrived just after it closed for the evening. Now they have upgraded it so you don’t just hang in a sitting position, you fly face down, Superman-style. Now they have upgraded it and charge you a tenner.

We were directed into a car park not far from the entrance and strolled down to the ‘prepaid’ counter where we received our annual passes. We had to sign them in front of the person on the counter. At the door out of the entrance building there was a sign saying “Skywire closed due to high winds.” The winds didn’t seem very high to me, but the Skywire was closed anyway. (I got a refund later, with no problem. They must be used to it.)

We took a zig-zag route from the entrance down to the biomes (actually, all the paths zig-zag), pausing to look at the flowers on the way. At the bottom we decided that we had earned a cup of coffee. There were many entrances to the cafe, but most were closed with signs directing you to the open one. In peak season I guess they would all be open. (We won’t find out; we won’t go there in peak season.)

Once inside the entrance to the biomes, we found the PCs to register ourselves as owners of the passes. There I discovered that I had already done that when booking the tickets, and moreover that we had each signed the other’s card. Bummer. But it proved easy to change the name on the registration system, so I became Diana and Diana became me. Symbolic or what?

The tropical biome was hot. The viewing platform, looking down upon the whole forest, was closed for safety reasons: a chalked sign said the temperature up there was over 40C. But we looked at the plants, read the display boards  and poked around in the replica houses from Africa, Asia and South America.

It was now lunch time, so we returned to the cafe for a very nice something or other with salad and duly fortified went on to the Mediterranean biome, where almost the first thing we saw was a Mediterranean restaurant. I’ll try to remember that for next time. We walked round that biome and ventured outdoors again, heading up the hillside. A striking sculpture above us seemed to be moving in the wind (even though, as previously mentioned, the wind did not seem high). When we got to the sculpture, we saw it was connected to a rope, with a sign saying “Pull”. So I did, and the sculpture moved, rocking backwards and forwards. Not the wind then. 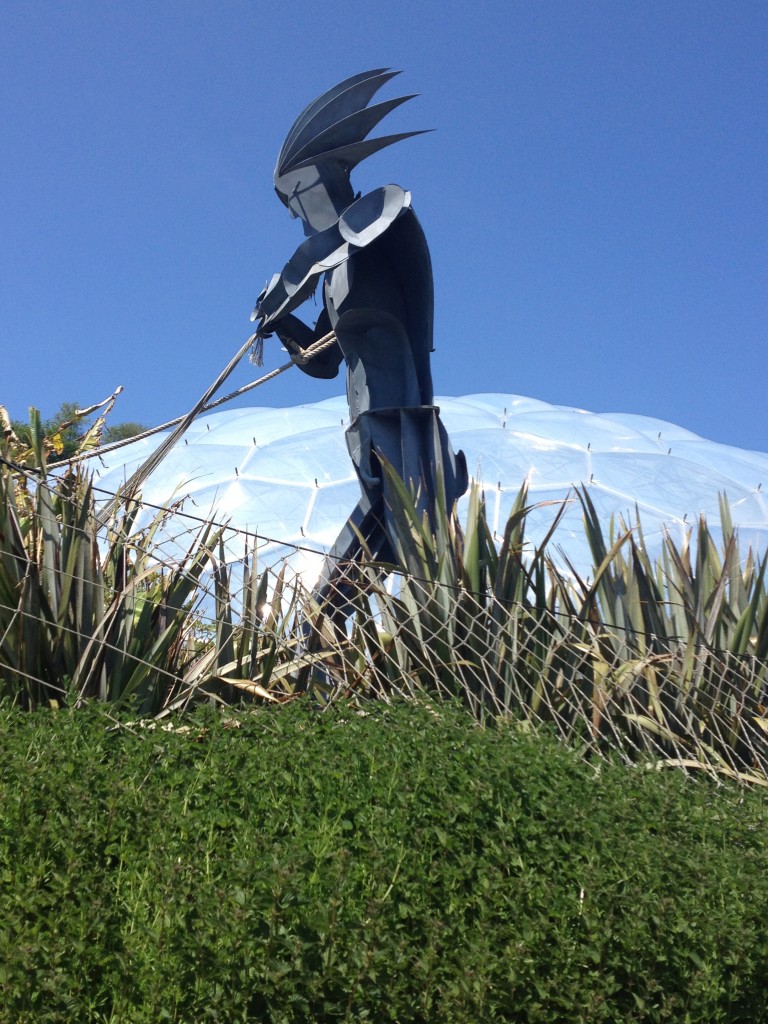 We followed paths up and then down again, through the gardens to the Core, an education centre with hands on stuff for kids to do. And a lift up to entrance level, if you don’t want to walk. At the top of the lift is a viewing platform, with a good view, as it happens, of the Skywire. It turned out it doesn’t run from where I thought it did, but from one of the car parks. If it hadn’t been closed, I would have missed my time slot anyway.

We got home feeling we’d had a good day out.

I had to give careful thought to a location for my birthday party. At home in Woking was not a good idea because there was a fair chance it wouldn’t be our home by the time June came. At home in Wadebridge was not a good idea because it is miles and miles from the rest of the country. (This is why we have spare bedroom accommodation at Wadebridge, so that people can come and stay for a few days.) (Hint hint!)

What I wanted was somewhere fairly central and attractive and special in its own right. I took some inspiration from friend Bob’s 60th held in Dr Johnson’s house, a small museum in London of which his daughter happened to be the curator. I have a daughter, but her workplace – the Structural Genomics Consortium laboratory in Oxford – seemed not quite the thing. Oxford, however…

Thinking about where my friends are (all over the place – geographically, that is) it seemed more and more that my old Oxford college, Oriel, would be the ideal venue. I contacted the conference department.

“We can’t do June 9th because it is still term time and there is a college function that day. But you could have the Second Quad a week later on 16th June, with the Champneys Room as a back up in case of rain.” (If you can remember back that far, the “in case of rain” option was a vital and necessary thing to have, seeing as how for a year or more the chances of rain on any given future date had been in the vicinity of 100%.)

I booked it for 80 people (a figure plucked more or less out of the air) and set about compiling a list of people to invite. Family members – wife, children, parent, siblings, in-laws, uncles, aunts, cousin, nieces and nephews. The Orieladelphians, no strangers to Oriel, as you might imagine. There were past members of the Oxford University SF Group, who spent a year coming to Oriel for meetings, but might not remember it, and the writers’ group (Pieria) that grew out of it. There were Shell folk, both current staff who are working hard to maintain the value of my pension fund and SOGs who are working hard (as am I) to spend it. There were Woking Writers Circle members, Woking neighbours, Wadebridge neighbours and other friends.

The invitations went out and the replies came in. At first refusals moved ahead as all the people who were already booked for holidays, other birthdays (the effrontery – other people having significant birthdays coinciding with mine!) and the Isle of Wight Festival responded promptly. Then acceptances took the lead (reassuringly) and pretty much held it, with some people from every friendship group. I confirmed 60 people with Oriel.

In the week before the party, I started obsessively tracking the BBC weather forecast for Oxford. It looked grim for the 16th: rain. But things improved and by the day before, a sunny afternoon was forecast. Hurray! But as we set off for Oxford from Woking (we still owned the house there, as it happens) on Sunday morning, birthday cake as cooked by Diana safely stowed, there were a few drops of rain and the forecast had changed to showers. Boo! We parked and rode, me carrying the overnight bags and Diana the cake, and arrived at Oriel with damp in the air. We were not surprised to find an empty second quad and a bustle of activity in the Champneys Room.

Diana put candles on the cake and we took our bags to the college guest room we had booked for the night. We returned to the Champneys Room to find Tris already there, along with Gerry and Gill and Martin, Jane, Frances, Keiran and Justin. Late for my own party! I said hello to everyone and then more people started arriving.

Extended conversations were impossible as every time I got into one, I had to break off to greet someone new. Several kind people brought cards and presents, which were put on the table next to the cake. The Oriel staff moved amongst us with champagne and canapes. Tea and coffee were at the other end of the room. Sandwiches were on the table. 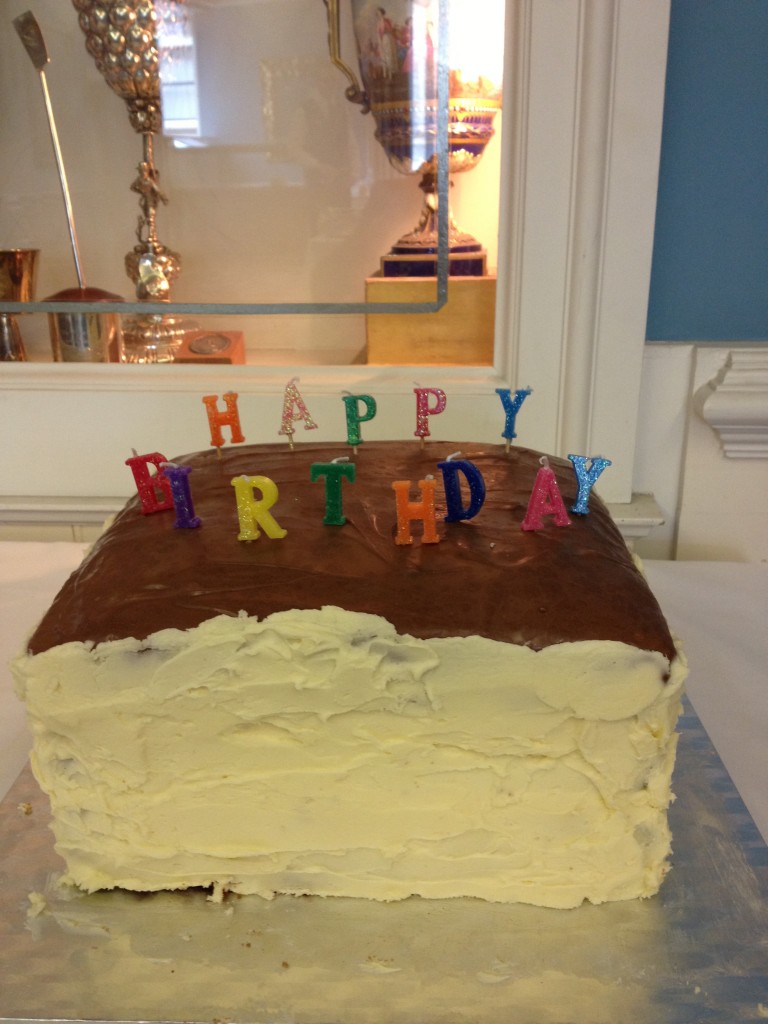 People talked and there seemed to be a great deal of mixing of groups without my having to do much stirring. After a couple of hours it seemed time for the speeches, one from Diana saying broadly what a wonderful bloke I was and one from me broadly agreeing. I think there were sufficient jokes in each. People laughed, anyway. Then Diana lit the candles, there was a rendition of ‘Happy Birthday’ and I blew the candles out, managing 12 of the 13 in one go. The butler removed the cake, cut it into 60 pieces and brought it back on plates for people.

People started to drift away, all seeming to have had a good time. At the end it was just my immediate family – Diana, Tris, Ellie and Joe. We carried the cards and presents to our college room and headed to The Bear for a drink. By this time there was no rain and it was pleasant to sit outside with a pint or soft drink. (Guess who had the pint?) Ellie and Joe went home and Tris, Diana and I found an Italian restaurant for a pizza.

The next day was hot and sunny – wouldn’t you know it? – as we sweated over packing all of Tris’ stuff from Wadham into the car. Using my master of 3-D random tetris abilities to the full, we got everything in, except Tris. She had to catch the train.

There’s stuff you can do and get at sixty that you can’t when younger. Free prescriptions (needed to cope with the feet and the legs and the back and the, whatever). A senior railcard for cheap(er) rail travel, but no bus pass, not yet, not for another four years. Discounted admission to the Eden Project, but not yet to the Regal Cinema. And the big one, the invitation to participate in bowel cancer screening. (In the interests of delicacy, I shall say no more.)

The great delight, and it comes from being retired rather than sixty per se, is being in Cornwall with no work to do and the beaches and cliffs and moors to explore or revisit, or not. Doing nothing is fun too. I say again, get in touch and come to visit.

My last posting was the middle of June. It’s now August. Anyone would think we’d been doing nothing for nearly two months. Well, that’s not quite true. There’s been

Plus, I discovered that the reason the trackpad on my laptop had ceased to click was that the battery directly beneath it had expanded fit to bust. So when I moved my mouse, it thought I was in the middle of a click-and-drag initiated on the trackpad and just highlighted areas. This, as you might imagine, made doing stuff on the laptop a trifle problematic. Anyway, I got a new battery, at great expense, and am back in action. Will blog more on some of the above at a later date.

Anyway, we no longer have a Woking presence, we are permanently in Wadebridge, and would love to see friends and family here. We accommodated five with Martin and family, so we’ve proved we can do it!