Tris had been quite keen to come to this year’s Orieladelphians Friends and Family dinner, but decided (sensibly) that with Important Exams imminent (like, starting the following Wednesday) she didn’t want to interrupt her routine with late night carousing in the Oriel SCR. So, like last year, the Smith contingent comprised me, Diana and Eleanor… Williams.

Diana was already in Oxford so I drove up by myself. The M25, according to the Traffic England website, was congested and had had traffic crawling along for practically the whole day, so I decided to go the alternative route via M4 and A34. This worked well until I reach the Oxford ring road. In fact it worked well round the ring road, until a couple of miles from Headington, when I ran into traffic whilst trying to get to the Thornhill park and ride. But I was in plenty of time and caught the bus, riding up top right at the front so as to peer down into people’s gardens on the way into town.

In Oriel Street, I ran into Patricia, Gaye and Malcolm, who were on their way to tea somewhere. I checked in at the Lodge, found our room (O’Brien Quad, 2 flights of stairs) and arranged to meet Diana at the end of Catte Street by the High. While waiting there, I saw Ashley and Rosie walk by on the other side of the High, but my call went unheard. Diana arrived and we met Ranulph and Thomas, who had been looking at clocks and were by now hurrying to avoid their teas/coffees getting cold.

We changed into party frocks and DJs (who wore what is left as an exercise for the reader) and ambled through to Third Quad and the Music Room for champagne and entertainment. People assembled quite rapidly, a smaller group this year than last, with the sadly unavoidable absence of Edward (see posting of 1st April) and the arbitrary absence of a few friends and family. Beverley was displaying a ring covered in about a month’s output from Kimberley. Neil had proposed and they are to be married later this year. Good news – and I was exaggerating about the “month’s output”. (Or I think I was. Actually, I have no idea what a month’s output from Kimberley looks like.)

Thomas (clarinet) and Malcolm (piano) played a duet. Eleanor arrived at the same time as John (Paul’s friend), waiting for the pause in the music to come in. Thomas and Malcolm played some more and Gaye sang. When they finished, Ranulph disappeared to bring in surprise flowers for Gaye and bottles of champagne for Thomas and Malcolm, only for the call for an encore – the hardy perennial ‘Suite from The Victorian Kitchen Garden’ by Paul Reade – to interrupt his plans. They still got their flowers and champagne, but it wasn’t quite such a surprise.

Diana was perturbed to discover from the programme that the first piece was “for Clarinet and Piano (or Harp)” and the fourth by a 19th century harpist written for “harp and piano duets” with a piano/clarinet version as played here. Was Thomas trying to drop a hint that she should bring her harp to the next dinner?

There was time for more champagne afterwards, one bottle of which turned out to have a nasty taste, and then we went across to the SCR for dinner. Ranulph had chosen an interesting and tasty menu: asparagus spears and quail egg, champagne sorbet, sea bass, the essential meat course – fillet of beef – at its centre (does anyone recall that time we had a large piece of fish instead of meat at an Orieladelphians dinner? No, of course not) and finishing with a blueberry compote. We had the by-now-traditional “men move on after every course” and for this purpose, due to the imbalance of men and women and where he happened to have chosen to sit, Thomas was elected honorary woman. Which he seemed to enjoy.

In the small SCR, to which we moved after dinner, there seemed only spirits to drink, which may account for a lot of things… 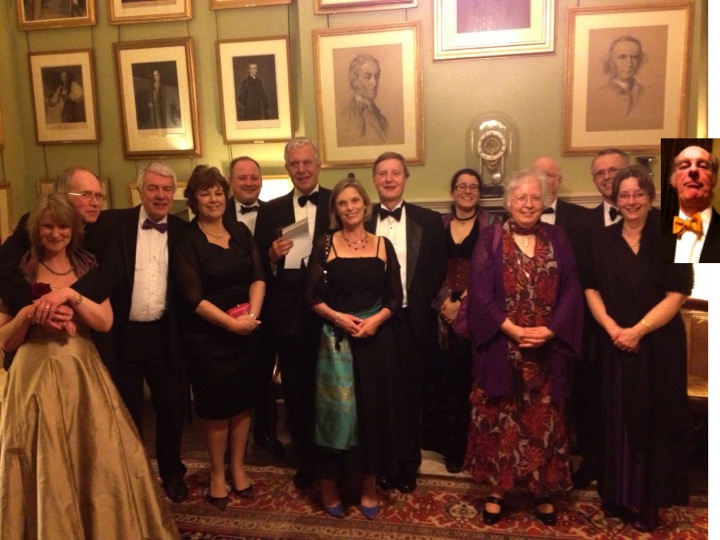 Orieladelphians, friends and family in Small SCR (note imperceptible insertion of the author into this picture)

Round midnight, that old jazz classic, Eleanor and Diana took their leave. We escorted Diana back to the O’Brien Quad (the geography of the underpass can be a bit confusing – and, no, it wasn’t the drink: Diana is off booze and has been for a while) and then tried to find an exit from the college for Ellie, but neither of the side gates opened on my key fob (which they had done earlier in the day) and we had to go the long way round via the Lodge. This I blame for Ellie’s missing her bus by seconds and having to get a taxi instead. She texted later to say she was home okay.

I returned to the small SCR and the brandy, until Beverley recommended the bourbon. Conversation was vociferous and vivid – so vivid, in fact, that it obliterated neurons on its way through my brain and I remember nothing of it. Every time, it seems, something gets in the way of my remembering the conversation at Orieladelphian dinners and it is always something different. Inexplicable.

At around three o’clock, things seemed to be winding down and I left for my bed. Imagine my surprise, at breakfast, to discover that things had not, in fact, wound down until much later. There was activity up to at least five thirty, and fallings over, and blood. It seems that I had missed most of the excitement, and trained blog journo that I am, I totally failed to ask any penetrating follow-up questions. This will remain forever an undocumented mystery, though if anyone wants to contribute eye-witness accounts, they are naturally free to add comments to this blog…

The real surprise of course was that, after all this, anyone had made it to breakfast!