I’ve been spring cleaning my study in the last week or two. I packed up all the books into boxes, blowing the dust off, and took apart all the bookshelves to move them away from the walls. Similarly, I packed up the files and shifted the cupboards. I took the desk apart so it could be moved as well.

This might sound a little drastic just to do a little spring cleaning, even when I tell you that the shelves and cupboards had been in place for over a decade. The next step will sound even more drastic: reassembly in a new room 225 miles away.

I’ll come clean. This wasn’t just about spring cleaning. We are actually starting our move from Surrey to Cornwall. Diana’s study and Tris’ study were also packed up, plus the books, DVDs and shelves from the sitting room, and the dining room furniture. And a few other items. (But not everything.) Removal men put it all into two vans and I headed for Cornwall to get to the house ahead of them.

The idea was for the smaller van to unload in the late afternoon and return home the same day, and for the larger van to unload some things and finish off the following morning. Then they would take a couple of items to Eleanor in Oxford and three beds back to Woking, where Diana awaited them. (I’ll explain that later.) All went according to plan, until the larger van was a street away from the Cornwall house and its rear wheel all but fell off. The guys were kind of glad it hadn’t happened earlier, such as at 60 mph on the A303. Fortunately, the garage up the hill was right dealership for the van (Ford) and a man came down to effect sufficient repairs to enable the van to park outside the house overnight. They finished unloading in the morning, then took the van up the hill for a full repair. This took most of the day, apparently, and so the delivery to Oxford had to be delayed until the following Tuesday, though they did get back to Diana on Friday morning.

The guys unloading had a tough job. My study and Diana’s are at opposite extremes of the house – mine two floors up in the attic conversion and hers through to the back and down a level. The guys had a lot of going up and down stairs. On the few occasions where I could say “that goes in the dining room” or “that’s for the breakfast room”, they seemed very happy.

At the end, my study was full of boxes and pieces of furniture (by which I mean ‘furniture in pieces’), with barely enough space to squeeze between them. It was a matter of putting shelves up, unloading some books onto them and taking the empty boxes out of the room in order to open enough space to put the cupboards up and unload some files into them, and remove some more boxes. Finally I could put the desk together. There was more room to move in Diana’s study, so I was able to put up shelves and cupboards before she joined me, by train, on Saturday. On Sunday I moved one set of shelves to a more satisfactory place.

Then the work began.

I had to amalgamate the shelves and books from my study and the sitting room (since we won’t have many books in the Cornish sitting room) so there was a lot of sorting into order and deciding what went where. Also, taking out duplicates which we hadn’t managed to find in nearly thirty years of marriage. And, to free up space, taking out books I am not too bothered about keeping. This included a string of naval warfare novels set in the late 18th and early 19th centuries, bought when I ran out of new Hornblower stories and didn’t want to go cold turkey. At length I had all the books in various types of order. Then Diana found some more in a box so I had to go through again to find some more ‘disposables’, which of course were not in the same part of the alphabet as the newly discovered ones, so much shuffling of books along and between shelves was necessary.

Then the real work began.

I had several boxes of stuff collected over the years – memorabilia, things related to my career, old diaries and notebooks, photographs. These all had to be looked through to see if I really wanted to keep them. Most of the diaries just had work appointments and I really couldn’t see myself wanting to know which audit client I went to see on which day in 1980, when I worked for Ernst & Whinney. If I ever write an autobiography (highly unlikely), it won’t contain details of audit clients. So out went the diaries. Then there were my notebooks from my last ten years at Shell. (I didn’t have any paper diaries from this period, since we were all electronic by then.) The note books are chronological and contain interview notes, task lists, drafts of documents, rough plans, mind maps, records of meetings and other stuff. They are full of initials and acronyms which I had to struggle to understand, though it was common parlance at the time. It’s amazing what three years (nearly) can do to the memory.

Anyway, I should say, “the notebooks were…” because they too went into the recycling bin.

In this way, I emptied three boxes about the size of a case of wine (actually, they were exactly the size of a case of wine, that having been the contents prior to superfluous notebooks and memorabilia). Still got two left though, sitting on the floor in a corner of the room, sneering at me and saying “What are you going to do about us, then?” If they don’t shut up, it’ll be the garage for them. The old one, with the ivy growing through the roof.

I found other stuff, carefully hoarded, just in case, such as sheets of Letraset, once upon a time used for headings and titles in the camera copy for amateur magazines. I think I am safe in chucking them out. If we reach a state where laptops and the internet and electronic publishing all cease to work, 32 point Cooper Black transferrable lettering will be pretty far down my list of priorities. (The same reasoning might be applied to the vinyl LPs – but it won’t. I’m keeping them.) 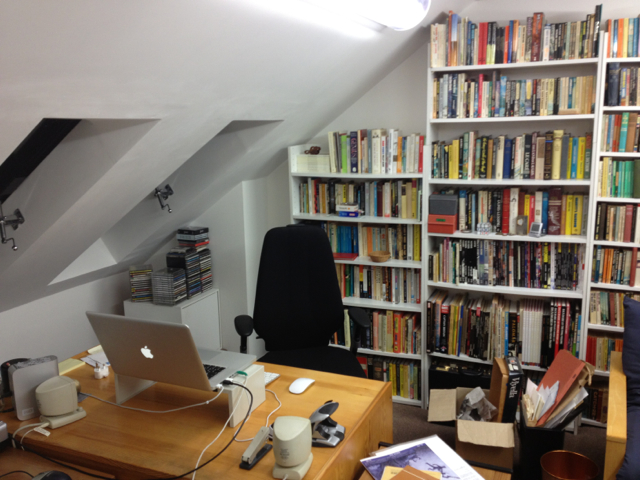 The next thing I need to worry about is the CDs. They aren’t in the right place at the moment, but there is nowhere better to put them, and nothing better to put them in. I need to look out for a CD rack, preferably a cheap one in a second hand shop. I have a strong suspicion, however, that they will just sit where they are, annoying me mildly, for the next several years. 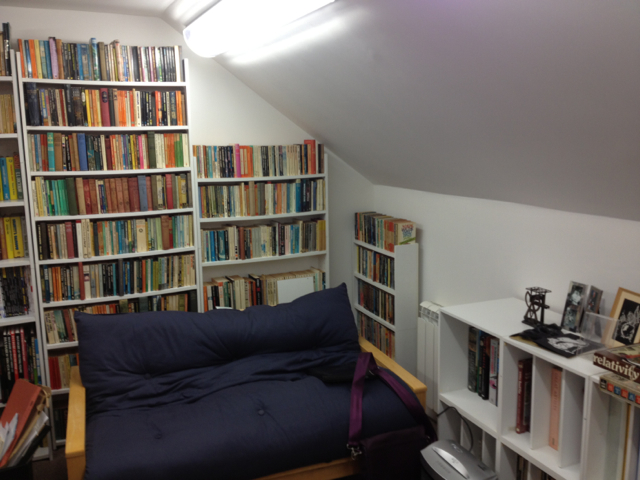 So now my study is useable, and Diana has sorted hers into shape too. The house is growing into the amalgam of both houses that we had envisaged. The collection of unwanted furniture in the (top) garage grows. Which brings me to the furniture going back east. Eleanor has long had her eye on the sofa bed and we were happy to let her have it, along with the dishwasher that became surplus to requirements when we had a new kitchen fitted in 2011. We’ve been trying for a year to find a way to get them to her that didn’t cost more for transport than buying new ones, and finally succeeded. As for the beds, well the Surrey house has three rooms that need to look like bedrooms again when it comes to selling, and we had excess beds in Cornwall from its holiday letting days. QED (or something like that).