New mass airflow sensor? I didn’t even know it had a mass airflow sensor, or what a mass airflow sensor did, but what it does is ensure the right mix of air and fuel. When it doesn’t work, the car pulls away from stationary more or less as usual, but if you try to accelerate hard it gives a gallic shrug and potters up to your desired speed in its own good time. This is disconcerting when the first time it happens is during an overtaking manoeuvre…

Anyway, now I have a new one. Just thought you’d like to know.

In my garden the firethorn towers above its advertised maximum height, covers itself in white blossom and then red berries in due season, and thrusts spiny branches out to obstruct the croquet patch. The buddleia grows seven or eight feet in a year, pushing out purple cones of flowers. The berberis has purple leaves on the outside, green on the inside, and needle spines that penetrate leather gardening gloves if grasped too hard. When it rains, the weight of water on the leaves makes it loom forward over the lawn like Dracula, cloak spread to engulf a screaming beauty. The magnolia has exploded since the neighbours felled their eucalyptus. Gorgeous large flowers erupt for a time and shed masses of petals which rot in an attempt to smother the grass beneath.

The bay tree provides more bay leaves than my spaghetti Bolognese can ever use, and it uses them to outgrow the neighbour’s fir trees and become a danger to the house. There are two apple trees. The Cox grows, and grows, though hardly ever produces an apple. The Worcester Pearmain stays small, but sprouts apples at every conceivable vertex. The plum, on a pixie rootstock to restrict its growth, defiantly pushes branches up and out in all directions. Most years it doesn’t bother with plums, but every so often they are packed so densely that the branches bow to the ground and break. The pear tree grew for many years before deigning to produce a pear, but now does so regularly, the pears going straight from rock-hard to rotten, passing through edible in an instant. Against the side of the house, catching the morning sun, is a thornless blackberry which every year grows half a dozen shoots to a length of ten feet or more. It has driven out the other berries planted alongside it and now rules the wall.

The lawn is green, even in the driest years, thanks to the liberal sprinkling of buttercup, daisy, dandelion and clover. In the wet, it becomes soggy and impassable to mowers and turns into a hay meadow with white, yellow and purple flowers, and tall grass stalks topped with seed heads waving in the breeze.

The tools I use most have cutting edges. The spinning blade on the mower chops even long grass and handshears deal with the lawn edges. Secateurs enable precision pruning and a handsaw with vicious teeth cuts through thicker live wood. Long handled shears reach into the thorny plants. The long lopper, a ten foot aluminium pole with a blade on one end connected to a lever on the other, reaches the top of most trees, except for the rampant non-productive apple. An electric hedge cutter commits primitive topiary on the berberis and leaves the lawn studded with sharp points.

Gardening is a never-ending battle against the propensity of green things to grow too much. Gardening is trimming, pruning back, slicing off, cutting down.

So what is it about the damned runner beans? I plant a row from seed when the soil has warmed, water them in, stick in some canes. Each time I think about watering them some more, it is raining. Tiny green shoots appear – weeds. I realise that perhaps I should have planted more bean seeds, redundantly, so I pop some into a plastic tub of soil and put it in a propagator in the conservatory, which warms it to accelerate growth. A bean shoot appears, from the original batch in the garden, with two leaves, which last a couple of days before being chewed off. Another shoot appears which wafts around until it finds a cane to wind round, not the nearest, but any one will do. Holes appear in its leaves. A third bean plant appears, hiding in a batch of weeds to protect itself. Of the other half dozen there is no sign. In the propagator, nothing comes for days, weeks, then a couple of weeds poke through. It’s warm, damp soil, for christ’s sake! What more can those beans want?

Plants have their own agenda and grow to keep people off-balance and anxious. I look out through the dining room window at the garden where the long grass merges with the drooping shrubs and bushes, sealing off the gaps and exits and closing in on me.

‘Pieria’ was the mountain of the Muses in ancient Macedonia, site of the Pierian Spring which gave artistic inspiration to those who drank of it. Pieria is also the name, chosen ironically as a temporary measure but never improved, of a group of young writers which first met in 1973 and continued to meet about four times a year in one or other of their homes for ten years. At the start, we were “prospective and part-time professional writers of science fiction” as the invitation had it, but over the years we improved, until most were making their living from writing in one form or another. At that point the mutual support and encouragement that Pieria provided was no longer needed by its members and it just sort of … stopped.

SF and fantasy readers might recognise some of the names in this list of people who came to one or more meetings, which is alphabetical to avoid giving any sense of precedence or importance, and I might have missed someone:

The first meeting was convened by Andrew, who gave Pieria its name because he invited nine people (and there were nine Muses). The last was hosted by Garry. After that, Diana and I held a few ‘Pieria Parties’ which tried to get the people together just for fun. The last of those was 1991.

Then, a couple of years ago, Rob Holdstock died, unexpectedly and much too young. I’d had the idea, for some time, of trying to get the group together for a party again, but it always seemed like there was plenty of time. Rob’s death showed that there wasn’t, but even so it was the beginning of this year before I started doing anything more than floating the idea with the few Pierians we saw from time to time.

I thought that, if I started asking in January, we might be able to find a mutually convenient date for everyone in May or June. That proved not to be the case because people are busy and do fill their time up, so in the end Allan & Rosemary, Mike & Deb, Dave & Hazel and Chris & Pauline joined us for a very pleasant lunch and afternoon, going into the evening, reminiscing and talking about what we were doing now.

If you had asked us in 1973 what we might be talking about forty years later, I doubt that the subject of ‘decluttering’ would have been mentioned. Everyone seemed to be wrestling with excess belongings, often trying to get two houses’ worth down to one. Hazel expounded the virtues of Freegle, where she found that people might arrive to take away one thing and end up taking two or three. Chris worried about how to remove duplicates from his book collection, where one copy might be a first edition hardback and the second a signed paperback. Hard choices. That wasn’t all we talked about, of course, but I was talking and listening, not making notes.

By coincidence, Surrey Artists Open Studios annual event was happening over the same weekend, and our neighbour Alison Catchlove had her sculptures out for display, so a number of Pierians went across to have a look and at least one came back with something. Alison seemed pleased, so I asked her if she wouldn’t mind taking a couple of photos of the entire group on my phone. And then so did three others. This is one of them: 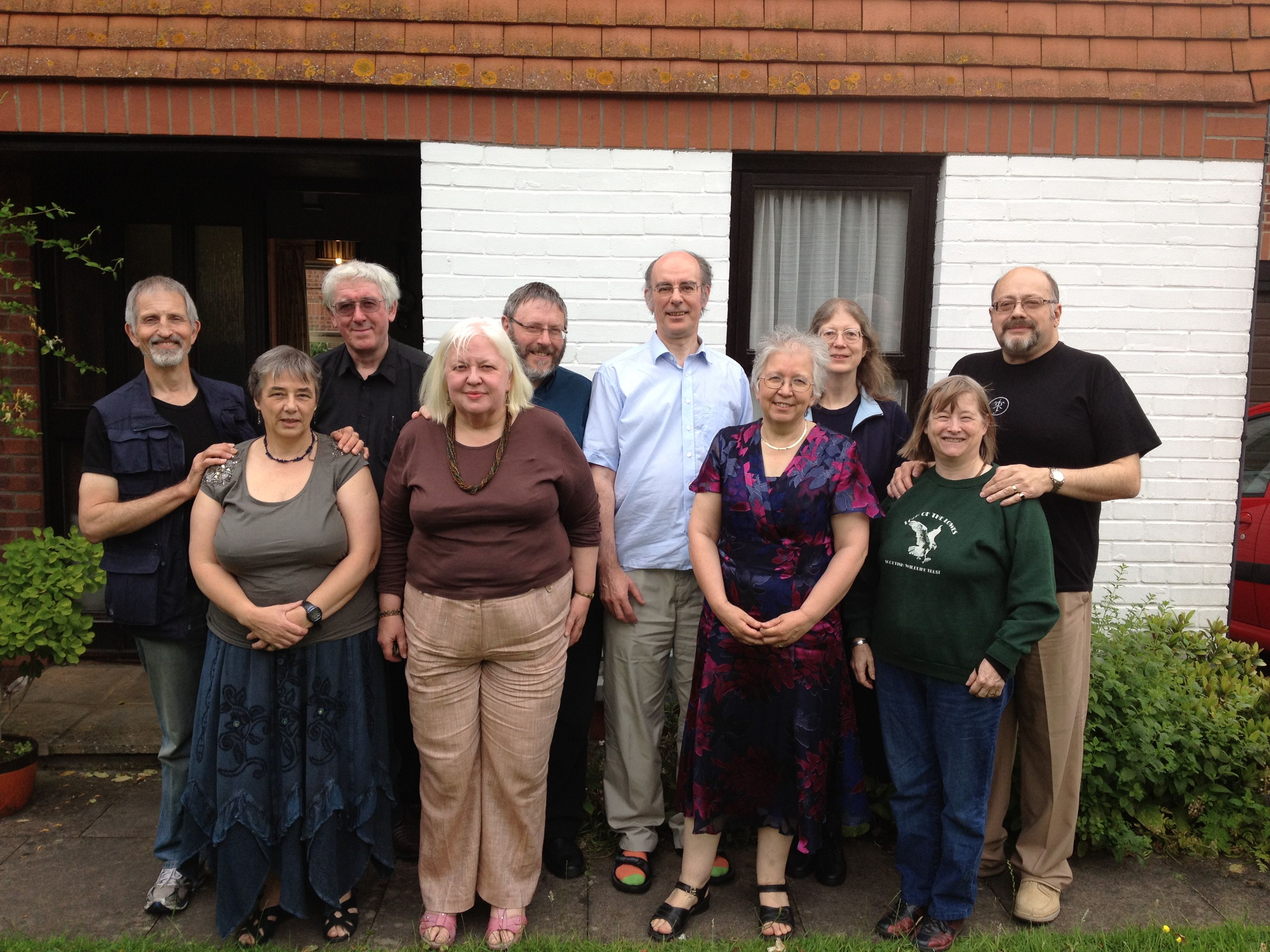 And for comparison, here are four photos from an earlier era, which Diana found and showed. You’ll notice a few differences – hair and beards, mostly, and smaller waist measurements… 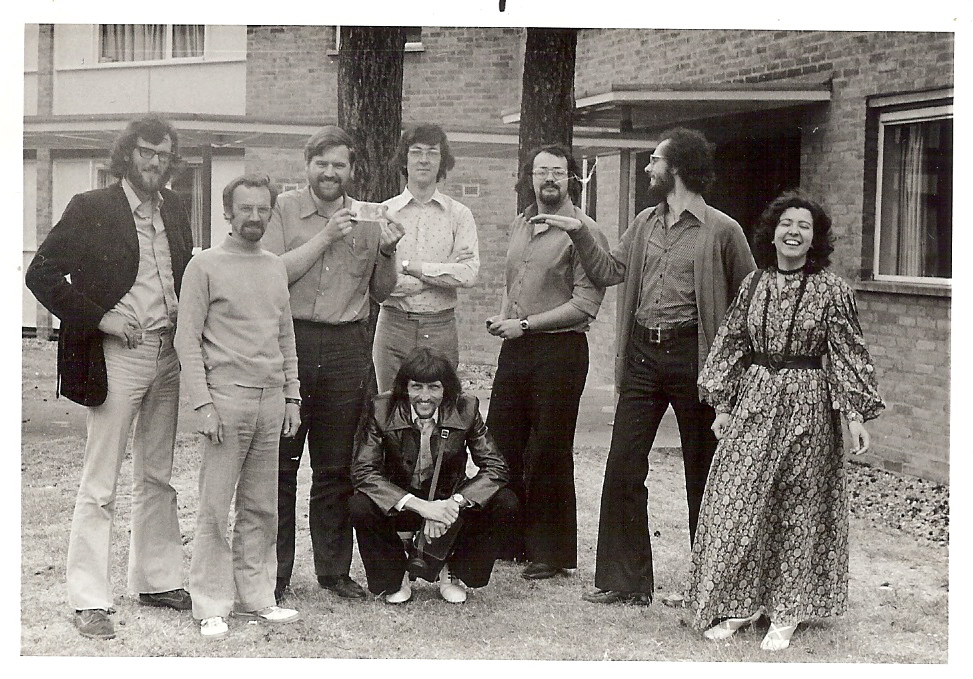 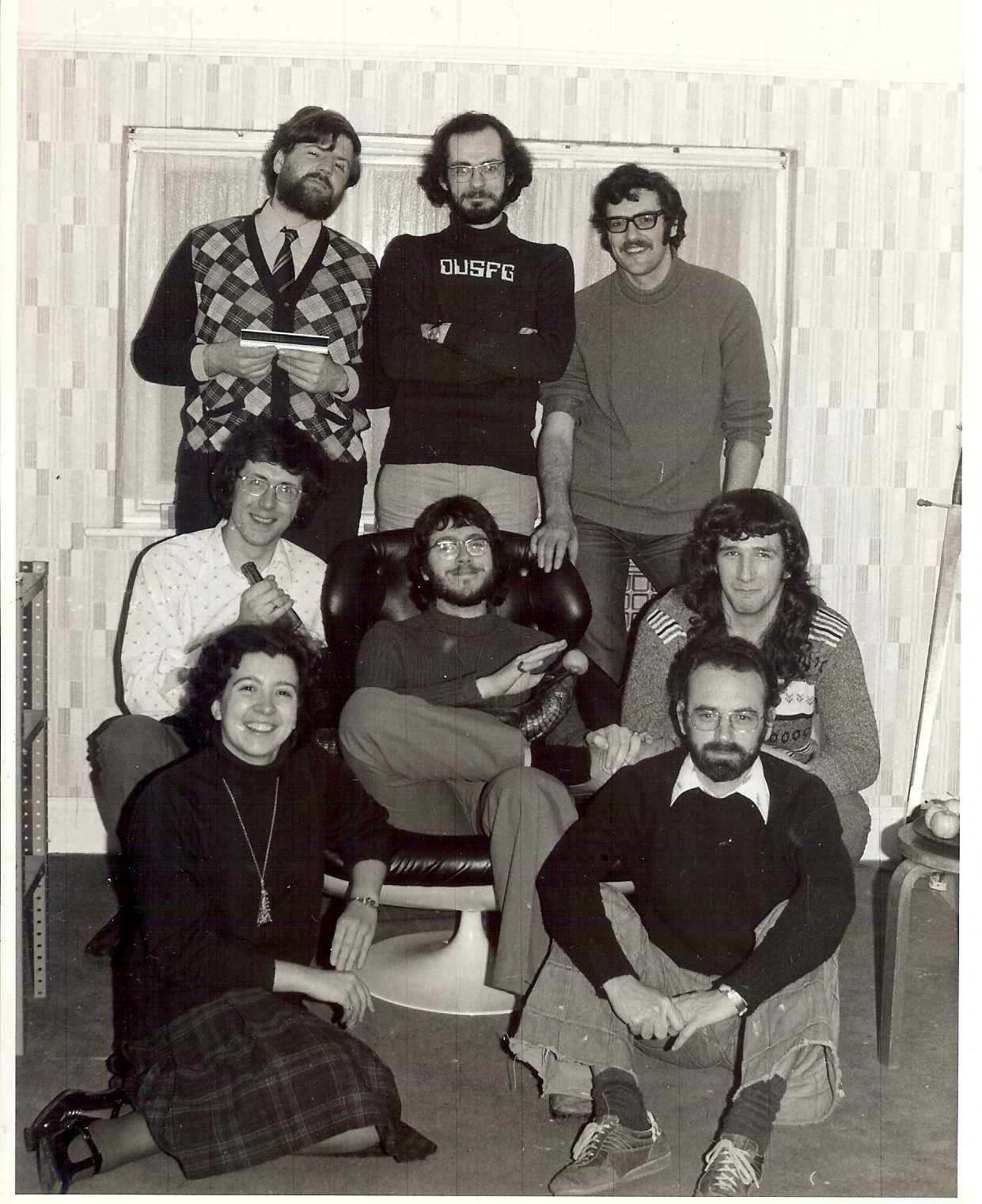 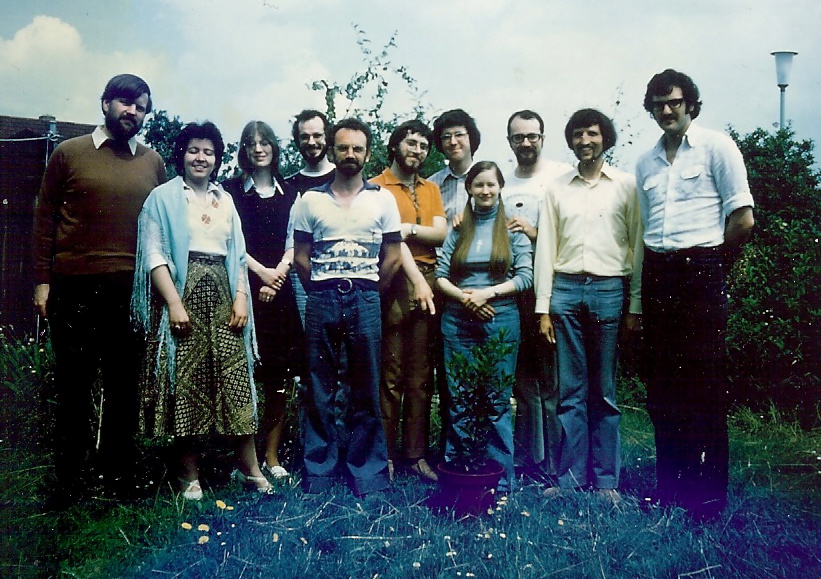 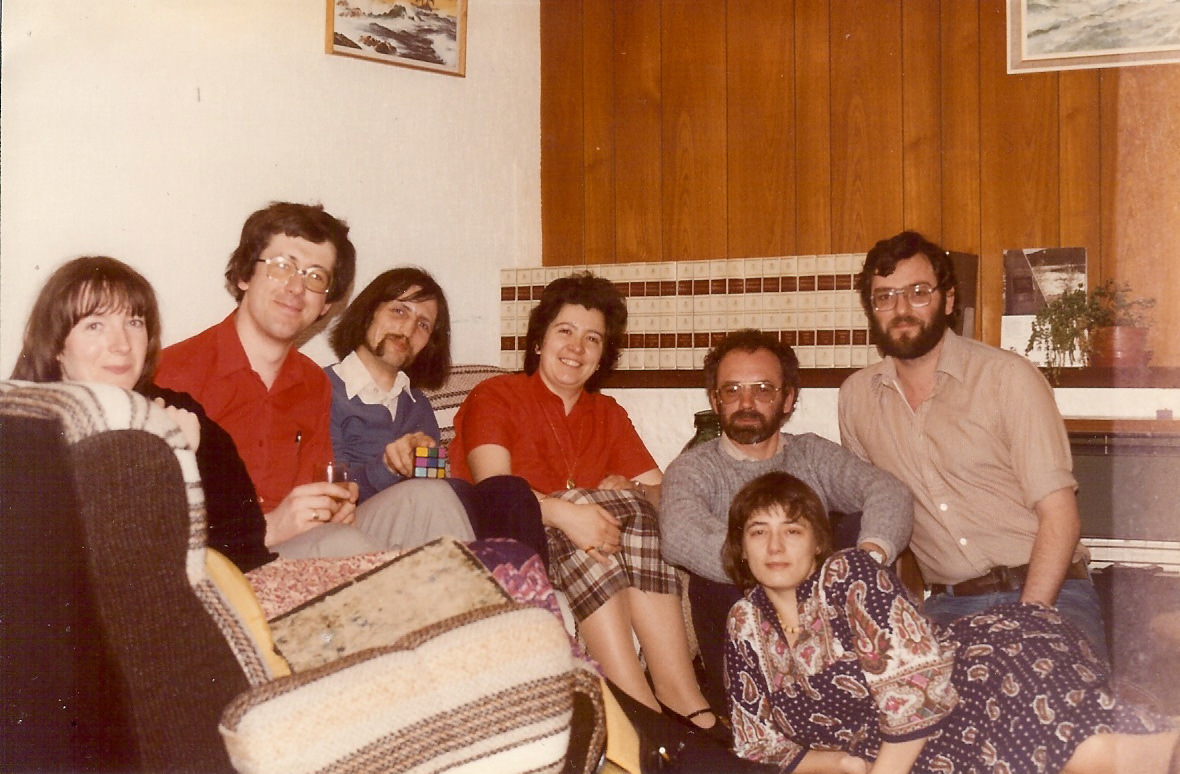 It was an extremely pleasant afternoon and we were only sorry that a few more could not make it. Maybe next time.