I went for a walk in Woking town centre on Monday. I was killing time between dropping Tris off for a hair appointment and collecting her at the end of it. I had one errand – getting a new key cut to replace one I had bent and almost snapped off in its lock – and that only took ten minutes or so. So I strolled out of the Peacocks shopping centre and into Town Square.

This used to be a fairly amorphous shape, not particularly well-defined and definitely not square. Now, well let’s say it’s in transition. Building works have raised the height of the Peacocks entrance and matched it with a new entrance to the old shopping centre. The library entrance is now a cafe and the library has been extended sideways with a new entrance no longer on the square. The space lost to the cafe has been compensated by moving library offices to a new floor and converting old office space to library usage (I nearly said ‘books’, but it could be computers and meeting areas as well – these new-fangled libraries). The Barclays Bank building and Christchurch remain as they were. The workmen were busy with new paving, so the walkways across the Square were narrow and fenced in, but it will look good when it’s done. The higher buildings for the shopping centres will give the Square a more closed-in feel, a more definite shape. But since the facades for the new buildings are curved glass, it’ll be even less a ‘Square’, and more of a circle. But I guess if you told your young children you were going to ‘Town Circus’ they’d be disappointed.

Going past the library, you get to the Theatre and the Council Offices, and past them is a new pedestrian and cycle crossing over Victoria Way, to link the canal towpath cycle route with the town centre. There has been a pedestrian crossing there for ages, which all the cyclists used anyway, but the concept was to have a distinct cycle crossing. Work began, kerbs were excavated and lowered, work stopped. Some problem with the traffic lights, apparently. Thus it remained for many months, many many months. Until now! The crossing is complete, the tarmac looks shiny, and when the green crossing light comes on, there are two – one green man and one green bicycle, right next to each other. So that’s how you know it’s a cycle crossing as well.

Except, except… after waiting for so long, the crossing was completed just as the canal bridge was taken down and the towpath closed, due to the building works for the new WWF headquarters on Brewery Road. So now the crossing goes only to the Lightbox gallery, a worthy destination, but an anti-climax. I used the crossing anyway, and found the Lightbox closed too (as it is on Mondays, I realised), but it was worth it to halt all the traffic…

The influence that this blog has! Last year, when writing about the Orieladelphians ‘Friends and Family’ dinner and the recital in the music room that preceded it, I remarked that I could never remember what the music was, despite Thomas’ excellent introductions. This provoked a storm of protest – well, one slightly aggrieved email from Thomas, saying I only had to ask. But there was more. For this year’s pre-dinner recital, there was an entire programme, with notes on each piece, and the words of the songs. So that tree you saw being cut down to make paper – that was my fault. 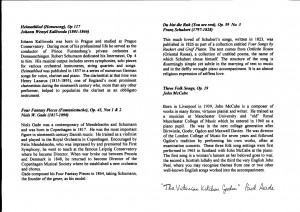 The ‘usual’ piece was not part of the programme, but was demanded, and played, as an encore. Since it wasn’t listed, I still can’t remember… Just joking, Thomas, put down that bazooka: ‘Suite from The Victorian Kitchen Garden’ by Paul Reade.

Also after last year’s blog, elder daughter Eleanor said that if younger daughter Tris didn’t want to come, she would like to. So this year, she did. Her husband Joe would also have been welcome, but since he is an anti-vegetarian, a large proportion of the food at formal dinners is off limits and he generally doesn’t think it worthwhile.

There were 23 people, the largest number we have had, beating by one the 22 who came to the Music Room inauguration dinner. Any larger and we will be in danger of exceeding the capacity of the Senior Common Room to accommodate us, and then where would we be? Last year, by coincidence, there were equal numbers of men and women. This year, men exceeded women – in number, that is, I make no other claims – making it harder to work out who should move places between courses, and how far. But not impossible. We discovered a workable solution involving the esoteric concept of the “bloke-space”, i.e. all the blokes stand up and move to the next chair vacated by another bloke standing.

There were more young people this year, too. Not only Eleanor, but also Thomas’ daughter Elizabeth, Ranulph’s niece Alicia and neighbour Kevin, and Edward’s guest David. The food was good, including ham, rabbit, hake, cranberry, venison, star anise, rum, shortbread and cheese (to pick words not quite at random from the menu). The drink was good, too: champagne in the music room, white wine, red wine, deshert wine, port, bran- bran- brandy, more por, fall over. But not before escorting Eleanor to the taxi rank at Carfax. No, I didn’t actually fall over. I pace myself better these days. Thanks, Ranulph, for once again organising the event.

We were the only group in breakfast, apart from a couple of people who quite soon left us in splendid isolation. A fried breakfast is necessary after a dinner like that. It was a pity that the conveyor belt on the toaster ran a little fast. Once through left the bread warm and floppy. Twice through and you had a large biscuit with decorative black edges.

After vacating our room and handing in the keys, Diana and I wandered through Oxford to the Museum of Natural History and the Pitt Rivers. We were due at Eleanor’s for lunch, but had strict (and understandable) instructions not to arrive before 11.00, so killed time in a serious educational and instructional manner. It was actually a Smith family gathering at Eleanor’s, with my mother, sister and sister-in-law visiting from Bromyard to see her new house (reaction: favourable). They arrived just after we did, with impeccable timing, exactly as mugs of tea were emerging from the kitchen.

Lunch was very pleasant. Ellie had a Mexican theme with fajitas followed by apple strudel – well, half a Mexican theme. Half an Austrian. By this time, I was starting to worry about my waist-band, but not very much. The food tasted too good. We all left about mid-afternoon and headed for home.

I’m not sure I recall what we had for supper that evening – something slight and unmemorable.