I was intrigued by an Infiniti advert about its new hybrid model (Infiniti = posh Nissan, a bit like a Lexus is not a Toyota), so I went to the website. The site takes a while to load on less-than-hyperspeed Cornish broadband – lots of moving graphics and fine pictures of cars – but is singularly uninformative when you get there. The model I was intrigued by is front and centre of the home page, as you might expect for something being actively promoted, and you can click on the image to get to a page specific to that model. When you get there, you find a picture of the car which you can click to rotate so you can see it from different angles and a running news strip of its umpteen wondrous features. Clicking on the picture and the news strip does nothing. Nothing else seems specifically connected.

There is a general “download brochure” button, from which you have to re-state the model you are interested in (several clicks) and then enter your name and contact details, without which it will not let you download anything. Stuff that. I am rapidly losing interest in the car, and the brand. And the company.

However, in a spirit of undaunted exploration I click on the name of the model range in the top banner, from which in only one more click I arrive at another, different page for the model. Here I find some information. Why couldn’t this be the page I was first taken to? It doesn’t contain an overwhelming amount, and I had to wait a couple of seconds every time I clicked for the next piece, but it’s better than nothing. Just.

I hope their cars are better designed than their website, that’s all.

P.P.S.
For comparison I tried the Ford website: moving pictures everywhere, unasked-for music, and information only in tiny chunks. Hence my opening hypothesis: all car websites are bad. Can anyone find a counter-example to prove me wrong?

In Woking, the snowdrops around our apple trees have been out for some time.

In Wadebridge, there are snowdrops out, but also a daffodil. 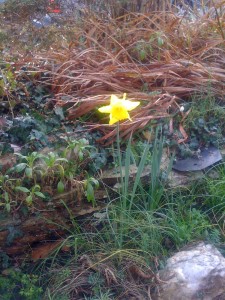 Only green shoots visible on the daffodils in Woking so far. Wadebridge thinks it’s Spring.

The solar panel people have been and there are now 20 solar PV panels neatly installed on our east-facing roof, with cables running down the side of the house and into the inverter hanging on the wall of our utility area.

Nothing is quite straightforward at Treforest. To get the inverter in the right position, I had to take down a little shelving unit that has been there for decades. It wasn’t very decorative – bare wood, with no paint, varnish or polish – so I wasn’t that sad to see it go. The interesting bit was how it had been fixed: the shelves were nailed to four wooden supports which in turn had been nailed on to the walls using 2-inch masonry nails. Whoever did that meant those shelves staying up. Whoever did that gave no thought whatsoever to how some poor sap might take them down.

A bit of brute force with a hammer lifted the shelves off the supports and a bit more work with the hammer and some pincers removed the nails from the shelves so you could handle them without piercing yourself.

Then came the supports. I tried hammering in a wedge and levering the supports away, but they wouldn’t budge. I did more damage to the wall than the support, I think. Next I chiselled into the supports, splitting them by the nails. The resulting fragments of wood were easy to remove. This left eight nails protruding from the wall by less than a centimetre, which meant 80% of each nail was still embedded in the masonry. My pincers were too small and weedy to get and maintain a grip. My hammer was not a claw hammer – good for hitting nails in, but not for pulling nails out. By now, the hardware shop in town was closed, so I decided to leave it until morning, when the electrician would be coming. He would be bound to have a claw hammer.

In fact he did, but it still took a mighty effort to heave out those nails, which brought off the surrounding plaster, leaving me with eight holes to fill, smooth and decorate. In fact, more than eight, because there were several holes revealed under the supports, where (I imagine) earlier attempts at nailing had failed. Take my advice: think about future generations, use screws. (My great-uncle Bill, a joiner in the family building firm, always used to hammer screws in, just giving them a turn at the end. “The slot’s for taking them out,” he said.)

The panel fitter (a former roofer) told me that some of my roof tiles were looking a bit dodgy round the roof lights. Since the roof lights had only gone in last November, this sounded alarming. “Let’s take a look,” he suggested. So we climbed up the ladder lashed to the scaffolding – a long ladder which even so only just reached the level of the planks, and a wobbly ladder because it was so long – and went to investigate.

Was this sensible, I hear you ask, to climb up a high, wobbly ladder? At my age? After all, the scaffolding planks must have been at seven metres, two and a half storeys, since the land slopes down outside the house.

The last time I went up high on ladders was shortly after I joined Shell. I was doing an audit of a plant shutdown at the Stanlow refinery. The manager handed me over to a plant supervisor to show me round. I was kitted out with boots, overall, gloves and helmet. The boots didn’t fit properly and rubbed, but they did have steel toecaps. The helmet was cool. I used to keep it visible on the parcel shelf in my car when driving round the refinery and it gave me much easier access through the various security gates. I have a photo of Eleanor aged about three wearing it, looking very cute. Anyway, the first thing the supervisor did was start climbing a sixty foot reactor column. I decided that this was some form of test  of the besuited office auditor chappie and went after him. We got to the top – great view over the Mersey – and came down again. Then he climbed another reactor column, and so did I. After that, things were OK. One thing, though: the ladders didn’t wobble.

Back to the solar panels. I climbed carefully and the ladder didn’t wobble much. We looked at the tiles, and he wasn’t talking about the tiles round the roof lights at all, but the ones along the valley, which have been in place for quite a few years, since the roof last leaked there, and where it hasn’t leaked in the intervening time. Also, the tiles weren’t that bad to my eye, just not up to his perfectionist standards. I don’t complain; he had replaced three or four broken tiles in areas of the roof not immediately connected with fitting the panels.

It’s a good view from up there, and it was good to see the panels up close, an opportunity that won’t come again.

The next morning, I got up and almost the first thing I did was check the display on the inverter. The panels were producing about 300 Watts, somewhat below the rated 3.9 kW. But it was early, the sun was low on the horizon and there was a layer of frost over the panels. Ninety minutes later it was up to 1.3 kW and rising. I am having to make determined efforts not to keep checking the thing – it’s addictive.